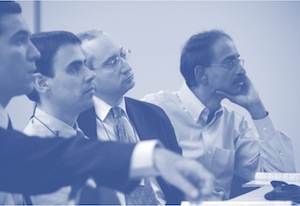 The International Society of Ocular Oncology (ISOO) is a non-profit corporation with the specific and primary purpose to advance and promote the practice of ocular oncology. The Society was established in 2004 with articles of incorporation, filed in Philadelphia, Pennsylvania. The need for such a Society was evident as the field of Ocular Oncology had developed over the preceding years.

In the mid 1980s and 1990s, the subspecialty of Ocular Oncology was gaining interest as a specialty specifically dedicated to the management of tumors of the eyelids, conjunctiva, intraocular structures, and orbit.  Several fellowship training programs developed and ophthalmologists were keen to refer affected patients to centers of excellence.  Those interested in Ocular Oncology organized occasional meetings for discussion of eye tumor etiology, clinical features, management, and outcomes.  International meetings were held in various sites under the title of “International Congress of Ocular Oncology”.  The earliest meetings were held in Cambridge, England (1977), Schwerin, East Germany (1981), Nyon, Switzerland (1984), and Moscow, Russia (1987).  Subsequent meetings were held in New York, USA (1992), Florence, Italy (1994), Jerusalem, Israel (1997), Philadelphia, USA (1999), Amsterdam, the Netherlands (2001), and Hyderabad, India (2004).

It became increasing apparent that this Congress required a formal Society to provide continuity of communication and progress inbetween each meeting.  In 2004, the ISOO was formally established.  Under the direction of the ISOO, subsequent meetings have been held in Whistler, Canada (2005), Siena, Italy (2007), Cambridge, England (2009), Buenos Aires, Argentina (2011), Cleveland, USA (2013), Paris, France (2015), and Sydney, Australia (2017).  Further biennial meetings are planned.

Currently, ocular oncology is a strong and independent subspecialty of ophthalmology with specific focus on eye tumors and cancers.

The mission of the International Society of Ocular Oncology is to promote the advancement of ocular oncology by coordination with general ophthalmology, general oncology, ophthalmic pathology, and allied sciences, by the encouragement of research, by the improvement of teaching and technical methods, and by improvement of patient care, through scientific meetings and other activities worldwide.